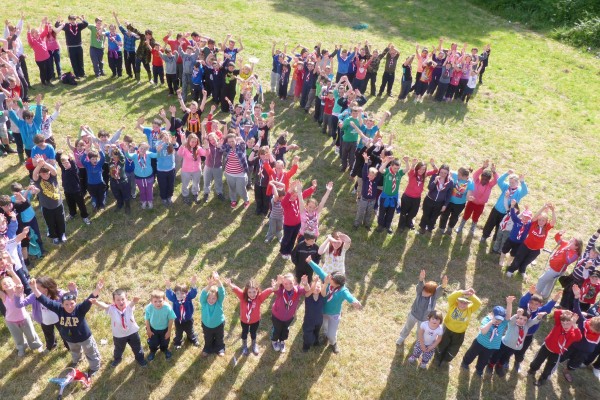 The De La Salle Scout Group is 85! Read all about it here.

We all met up at the den in Faithlegg at ten in the morning (TEN IN THE MORNING??) to get The Unit’s 85th birthday party off to a flying start, Annamae and Megan had brought the tennis balls but the games were soon forgotten as the building of the site took over, the 3rd scouts at one end of the field, the 7th at the other, the erection of the sites was quick and efficient. Both sites had been all but completed by the time that the Cubs, Ventures and the remainder of the scouts had arrived at 7pm. Just in time for us to pitch even more tents! Fantastic. Friday evening passed in a blur of comings and goings to the store, looking for ground sheets, spare pegs, tent poles, anything that you could possibly imagine to be associated with an icelandic tent, just to make sure that everyone had all the equipment needed to
guarantee a good nights sleep… yeah, that’s it, a good nights sleep is always guaranteed on camp….

Next up was dinner, a stew consisting of potatoes, minced beef, and vegetables, burnt as black as coal, but it would have to do… But the wash up was done afterward, not an easy task, and a very well done to Niamh Burke who did two-thirds of it by herself while everyone else was off helping the cubs or other such deeds. A midnight hike was called for by the leaders, a trek through Faithlegg house’s grounds and up the Minaun and back took just over an hour and a half for our super-fit scouts and we were all back in our tents by half two for bed.

Having agreed a lie in until 9:30 with the leaders, we were somewhat disturbed to find out that it was just 7:30 in the morning when the 7-year old Ed came into our tent bashing his pots and pans in our faces. Thanks Ed. Your size doesn’t make me any less angry with you. After that…. disappointment it was onto breakfast!The days most important meal, choco rice of course, an old favorite of the 7th, it’s all about the simple things. Still, it was better than what the 3rd got (trust me, you don’t want me to go there).

There was some free time after breakfast, used efficiently by getting to know our fellow scouts and such, before a certain Mr. Dean Purcell named out the 10 PL’s for the days bases; myself (Matthew), Adam, Orla and Alex from the 7th, Clodagh, Annamae, Megan, Becky and Shane together (god only knows why…) and Jennifer from the 3rd scouts and Josh from the 13th scouts the tenth PL. There were 5 bases, the volleyball base which was run by the lovely Jack Power (no ladies, he didn’t take off his top), the backwoods base run by the equally as lovely Bill Carton and Emily Costello. The zipwire, set up by the leaders, but with Ross Phelan pulling the strings, Jack Pickard and William Counihan directing the Maze as the Blindman’s trail was run by Shona Murray and Ciara Murphy. It might seem a bit pointless to go through the ventures who ran all the bases, but really, it’s not, they were all managed expertly. The bases were originally meant to be an inter-patrol competition, with 10 patrol’s made up of the ten senior PL’s and all the rest of the scouts, cubs and beavers. However, I think that in the end it was more for fun than anything else with said competition having no winners. 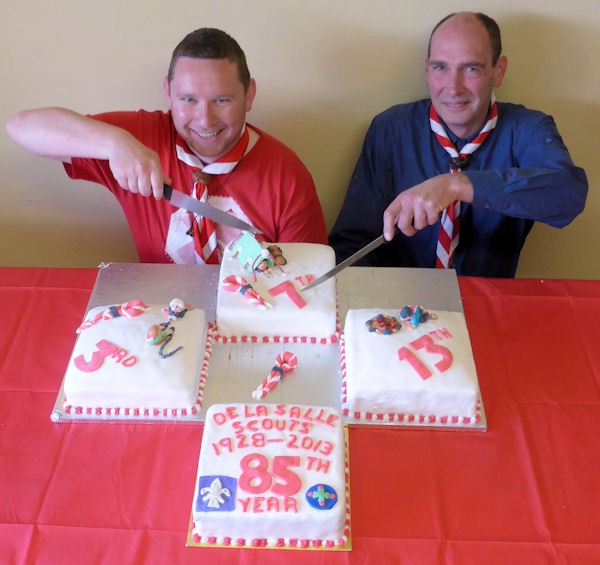 The next few hours or so were spent fixing our site and getting really long motivational speeches from Roddy and Cunny, which had such an inspiring effect and stuff… Onto the birthday preparations! The barbecue was fired up by a specially selected panel of leaders, and the burgers were thrown on, everyone was fed and a fantastic photo of ’85’ was taken from the roof of the den with the numbers 8 and 5 being made out of all the ventures, scouts, cubs and beavers, a fitting way to mark the occasion. Later on in the evening was the much awaited campfire, led by Dean Purcell and finished with a resounding course of, “Oh I wanna go to heaven”, everyone was happy to see their sleeping bags.

With Ed gone home, it was time to lie in, and we did so in some style by staying in our trusty sleeping bags until well past 9 o’ clock (Ye won’t get away with that on The Phoenix now lads!). When we got up, it was another feast of choco rice that was awaiting us, although it could at least be accompanied by a jam sandwich, another favorite. We were living the high life!

It all came crashing down soon enough though as the leaders informed us of our need to take down our site before we could go home, our spirits were slightly lifted however, with a much appreciated offer of help from the 3rd’s contingent on the weekend as they had already taken their site down. It was an offer which was short-lived though as they soon abandoned us in favor of a water fight. Serious lack of commitment there now lads. We got the site down fairly sharply though with time left to join in on the water fight, all too soon it was time to go home though and we were sorry to be leaving. A big thank you to all the leaders, Sarah Lawerence, Dean Purcell and Ciaran Kelly for organizing the weekend for us!