Venture Scouts visit to An Pobal 2013 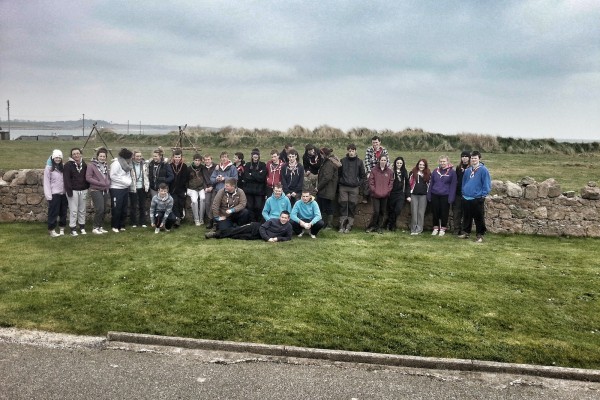 On Friday at  7pm 11 Ventures, Neillers and Riordan meet on Mayors Walk to get the gear ready to load when it arrived.

Emily realised we needed tinfoil so Neillers sent me and Michael down to get some. While we were gone the lads packed the bus supervised by the bus driver Bart Simpson(that’s really his name). When we returned we got on the  bus. 11 Ventures from DLS, 8 Ventures from Ballygunner and Neillers.  Ballygunner annoyed the majority of the bus with their singing all the way down.

We arrived  at Carne Beach at around 9pm where we unloaded all our gear and pitched the tents. Once the tents were pitched, Neillers held a democratic vote where I got elected to write the log. At around 10pm we played some kind of game that resembled IRA by chasing people down and getting their letter. Some people were harder to break than others but it was still fairly fun. By that stage it was 11 o’clock and there was a music quiz after which we had free time but for some reason nobody seemed to like sleep with some staying awake until 3 a.m (scum).

On Saturday we woke up at half eight and had breakfast which for me consisted of a can of lucozade and a trangia pot of rice crispies (or whatever cheap knock off brand we had to resort to) for the day we had bases including archery, climbing, ESCAPE, gladiator fight and bouncy slide. There was a break during the bases for lunch where I made the awful sounding but quite tasty peanut sandwich while the others had cuppa soups, ham sandwiches and crisps.  Most of the bases were usual things you would do on a camp, the new one for me anyway was escape, which was a game where you tried to make it to a person while somebody tried to stop you, very fun game, sore as well. We then finished at half five and were given 2 hours free time.

Ruairí, Jack Power, Emily and Shona prepared our dinner of Chicken Curry and Rice after we borrowed some gas because we ran out of gas. Some of us were too hungry to wait so we just went to the cafeteria and got chips, good times! We then sat in the tents instead of going to the campfire and we then got ready for the disco. Jack Power more than others who decided to go in his casual clothes, the disco lasted three hours and everyone was sweaty afterwards. We went back to the tents and did whatever Ventures do till the small hours of the morning, that’s sitting around talking crap for those of you that don’t know!

On Sunday we woke up and had a go on the bouncy slide for a bit before going home. In the end a really class weekend, looking forward to the next one……..

An Pobal is a Provincal event run by Ventures for Ventures. This was the 3rd An Pobal, all of which have been attend by De La Salle Ventures. This was the biggest one yet with 116 Ventures in attendance, over 30 of which were from Waterford. A big Congratulations to Brendan Tyrrell the Provincial Venture Rep who did most of the work to make this An Pobal Carne happen.